Launchspace Technologies engineers include leaders in the design, planning and analysis of spacecraft and launch vehicles as well as systems engineering

Launchspace is on the International Space Station to Measure Orbital Debris

Launchspace Technologies, a Florida company focused on orbital debris detection, tracking and removal, plans to measure the impact of orbital debris (2nd half of the article). Read more [HERE]

Arlington, VA and Boca Raton, FL. Launchspace Technologies, Inc., is pleased to announce several milestones in the development of its innovative solution for orbital debris remediation and enhanced spacecraft shielding. The payload will be space qualified on the Airbus Bartolomeo external platform on the International Space Station (ISS). Read more [HERE]

Since the company unveiled plans in 2017 to send Debris Collection Units into equatorial orbits, Launchspace Technologies has conducted a study funded by the U.S. Air Force, signed a NASA Space Act Agreement and won support from Airbus for its plan to test technology on the International Space Station’s Bartolomeo platform. Read more [HERE]

For the test scheduled to begin in 2022, Launchspace plans to gather data from the Bartolomeo platform with Debris Impact Pads equipped with sensors to record the impact, force and orbital location of debris on the ISS.Read more [HERE]

Boca Raton, Fla.,-based Launchspace Technologies Corp. pitched its system for detecting and removing orbiting space debris, which has been identified by federal agencies as a growing problem. “Our space-based sensors will detect all orbital debris, and have customers either maneuver away from large debris, or Launchspace will use large debris impact pads … to remove small orbital debris,” said John Bauman, CEO of Launchspace. Read more [HERE]

Not A Job, But An Adventure – Space Traffic Controller

In the not-too-distant future an international regulatory and enforcement agency may be looking for Space Traffic Controllers to fill hundreds of positions for well-trained professionals.
It is likely that these positions will be located in an international metropolis such as Washington, Paris, London, Hong Kong, Rome or Moscow. Applicants must pass a rigorous training program including many hours in class and in simulators. They will probably be required to have prior training in spacecraft dynamics and orbital mechanics. Read more [HERE]

Soon, another 10,000 new satellites will be launched into the most congested space in the universe. There are already an estimated 100 trillion objects in low-earth orbits, most of these things are debris of varying sizes. The implementation and enforcement of space traffic management (STM) policies and regulations will be extremely complex and expensive for governments of spacefaring nations and all users of the near-Earth space domain. Compared to air traffic management, the challenges of managing low-orbital traffic will be orders of magnitude more sophisticated. Marshall explores this in more detail in an article published in Space Daily [HERE]

Launchspace Technologies propose sending Debris Collection Units with replaceable, mesh Debris Impact Pads into orbits shaped and synchronized to clean up debris as it crosses the equator, while stearing clear of satellites and debris large enough to track. SpaceNews cover the story in full [HERE] 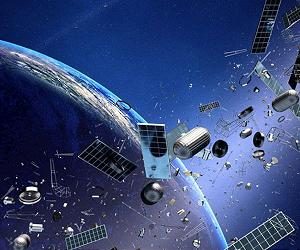 On April 3rd, at the 33rd Space Symposium, the space community will hear about a possible game-changing discovery that may create a new “Ecosystem for Near-Earth Space Control.” At the Technical Track presentations on Space Situational Awareness, Marshall from Launchspace Technologies will be introducing this patent approved invention to the symposium attendees. A brief abstract of the presentation was published in Space Daily.

For more information on the Space Symposium follow the link HERE

With Time Running Out, Space-debris Removal Picks Up Steam:

As plans proliferate to launch thousands of new satellites into low Earth orbit (LEO) for daily Earth-observation updates and broadband data links, so do the clouds of hypersonic debris that threaten to form an impenetrable barrier to future space operations. To mitigate the danger to the growing off-planet economic infrastructure, engineers on three continents are working on different concepts to clean up the orbital pathways. The problem is similar to halting the growth of  carbon …

Launchspace Technologies already has discovered a new and cost effective approach to removing and controlling low Earth orbital (LEO) debris. This concept may well replace all other proposed remediation ideas.