Launchspace Technologies engineers include leaders in the design, planning and analysis of spacecraft and launch vehicles as well as systems engineering

The team at Launchspace Technologies Corporation has a 40 year history of innovation in the space industry, working with commercial, government and military clients. Our team includes innovators who have invented and created many of the spacecraft advances that we see in today’s satellites and launch vehicles.

John Bauman is a serial technology entrepreneur and pioneer in IP over satellite TV technologies as well as nearly a dozen technologies including IPTV/digital Video on Demand, mobile banking and advertising, broadband, telecom, microelectronics and many more. He has successfully taken new technologies from launch to as much as $80 million in revenue within the first year, consistently exceeding on-target earnings (OTE) objectives for his clients.

John has helped companies by taking on roles that include business development, sales, marketing, product management, raising capital as well as CEO. John has created many of the technologies for his clients and has a patent in Point-of-Sale technology. John has brought many new technologies to North America as well as starting several of his own technology companies. John has a lifelong interest in and passion for the business and technical potential of the spacecraft and launch services industries.

Marshall Kaplan is a recognized expert in space flight technologies, orbital mechanics and orbital debris removal methods. He is a pioneer in space debris research, having carried out the first study of space junk retrieval while a professor at Penn State. He is responsible for assisting most major aerospace companies in the U.S. with capture projects ranging from $1 million to several billion. Clients include Boeing, Lockheed Martin, Space Systems/Loral, NASA, Ball Aerospace, GE and many more. Dr. Kaplan has also acted as the CEO of multiple start-up companies.

In addition to publishing well over 100 papers, reports and articles on aerospace technologies, he is the author of several books, including the text, Modern Spacecraft Dynamics and Control, and Acquiring Major Systems Contracts: Bidding Methods and Winning Strategies. Dr. Kaplan holds advanced degrees from MIT and Stanford University. He is a Fellow of the AIAA and the AAS, and is a member of the International Academy of Astronautics. His professional activities include membership on several national committees dealing with space transportation and space systems. He is an instrument-rated, multi-engine pilot with over 4,000 hours of flight time in a dozen aircraft. 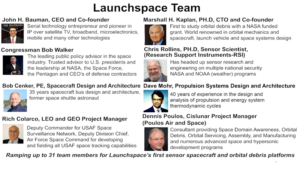